Image was captured around 1am, in Gold Beach Oregon. Read about her interesting past. 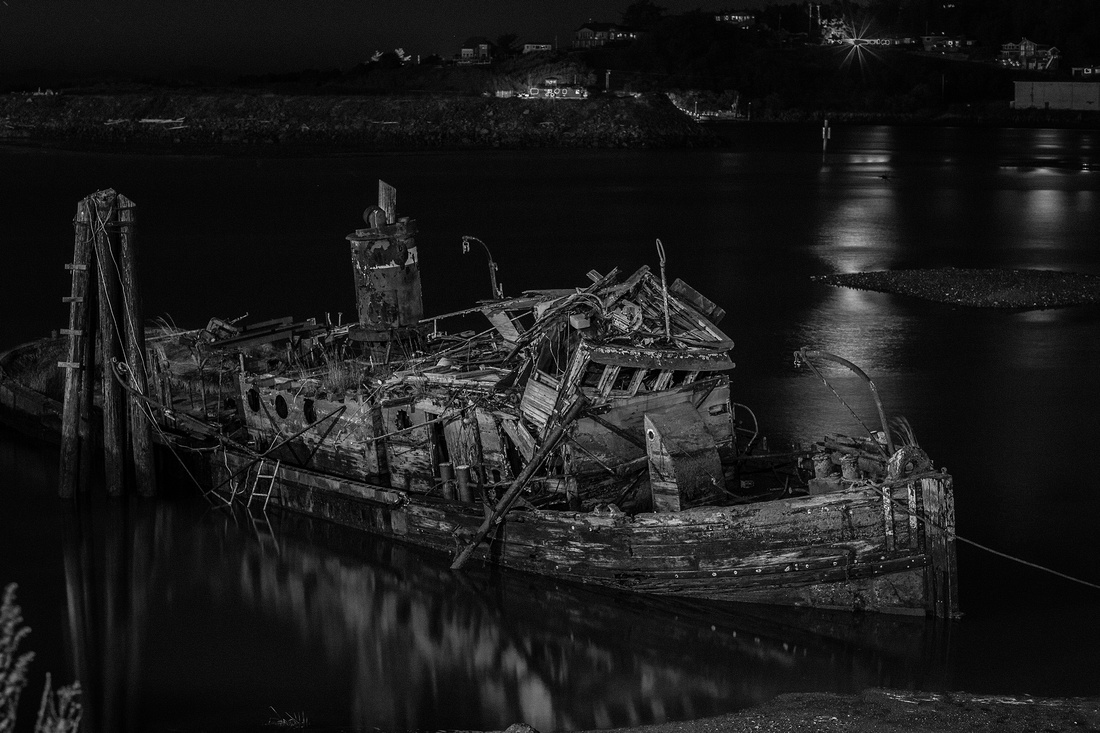 The derelict vessel Mary Duncan Hume is located on the south coast of the Rogue River, in the city of Gold Beach, Oregon, United States of America, at the same spot where she sank in 1985.

The Mary D. Hume is a steamboat constructed in 1881 from local white cedar. The historic vessel was built by R. D. Hume in Gold Beach for use by his cannery business. Hume’s ship, named after his wife, has changed hands many times during a long and varied career that spans nearly 100 years. Now the shipwreck is a relic from a long abandoned fishing and coastal culture.

R. D. Hume was a businessman and those days he started the cannery business at Wedderburn and Gold Beach, which then was called Ellensburg. The city was renamed after a beach near the mouth of the Rogue River where hundreds of placer miners came to look for gold.

At first the ship was primarily used to transport timber and canned fish between Gold Beach and San Francisco, California. New canning techniques used by Hume allowed the fish to reach markets all across the States and she soon became a symbol of the highly profitable salmon fishing industry of Oregon’s South Coast. But after 10 years the salmon industry fell into decline as the number of the fish in the waters rapidly reduced, mainly due to water contamination and over-harvesting.

In 1890 the ship was sold to the Pacific Whaling Company who refitted her as a whaling ship. For the next 10 years Mary D. Hume sailed from Alaska in the Arctic waters of the Bering Sea.The ship acquired a record for largest catch of baleen whales in a single 29 month voyage from 1890 to 1892, hauling in 37 whales in a shipment worth $400,000. Her second whaling voyage also made history. For this voyage Mary D. Hume was at sea without stopping the six years from 1893 to 1899.

In 1899 the vessel once again became a cannery tender, this time on the Nushagak River in Alaska. After sinking in the river she was repaired and converted into a tug boat. The American Tug Boat company took ownership and she was primarily used for towing logs and barges on Puget Sound.

In 1914 she also served briefly as a halibut fishing ship in the Alaskan Halibut industry, before continuing to operate as a tug boat for another 60 years. In 1954 a 600hp diesel engine was installed and the superstructure altered to its present design. By the 1970s, Mary D. Hume carried the proud title of the oldest serving commercial ship.

In 1978, after an impressive 97 years in operation, Mary D. Hume was retired to Gold Beach and in 1979 the vessel was placed on the National Register of Historic Places. Her last voyage was to the south side of the Rogue River, not far from where she had been originally constructed where the new owners tried to make her a floating museum, but they failed.

Sadly the planned restoration of the ship came to a halt when a small incident caused her to sink in 1985. With no money to save her, the tides, storms and coastal weather very quickly devastated her. She still sits in the muddy waters on the same spot where she sank.

The shipwreck is slowly breaking apart situated several meters offshore. Approaching the remains is a little bit dangerous, but her ravaged beauty can be observed and enjoyed from the coast line. The wreck of Mary D. Hume is now the home of rare flora and fauna, and a vivid reminder of the past.

The shipwreck is slowly breaking apart situated several meters offshore. Approaching the remains is a little bit dangerous, but her ravaged beauty can be observed and enjoyed from the coast line. The wreck of Mary D. Hume is now the home of rare flora and fauna, and a vivid reminder of the past.