History
This radar site was established during World War II early in 1942 as a part of a chain of radar stations along the West Coast of the United States and Canada. These secret radar sites were built to provide early warning of approaching enemy aircraft and ships but also served to assist friendly aircraft that were lost or had in-flight emergencies. This site was established in the remote Cape Arago area along the southern Oregon Coast with the Cape Arago Highway providing providing one-way-in, one-way out access. The Cape Arago highway was closed to the public during World War II. 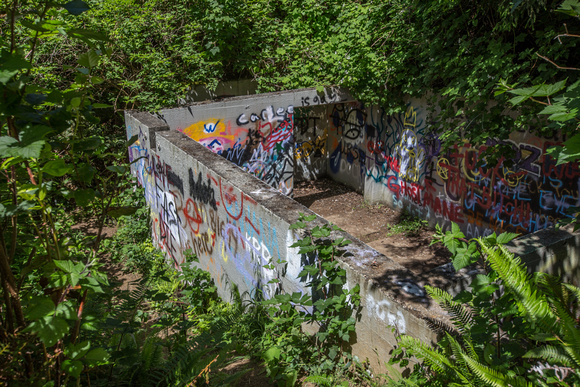 Simpson Estate Mansion during WWII with Soldiers and their Vehicles at the Entrance.
The radar site itself consisted of a concrete operations building containing the SCR-270 radar equipment and an antenna located on the side of a coastal hill. The cantonment area was located below on the former estate of Louis J. Simpson with the estate mansion serving as quarters for the officers and men of the garrison, some 35 to 50 men.

Cape Arago Radar Station Operations Room. Note the grid of cable troughs built into the floor.
The operations building was built into the side of a hill as protection and to camouflage its functionality. The camouflage included a large pre-existing tree that overhung the building and was left in place to prevented the antenna from casting a recognizable shadow and to hide the generator and equipment exhaust vents. The operations building itself was 80' by 21' with two protected entrances and 12" thick concrete outer walls. Four internal rooms provided an operations room for the shift workers, a duty officer's room, an equipment room for the radar and a generator room with two generators. 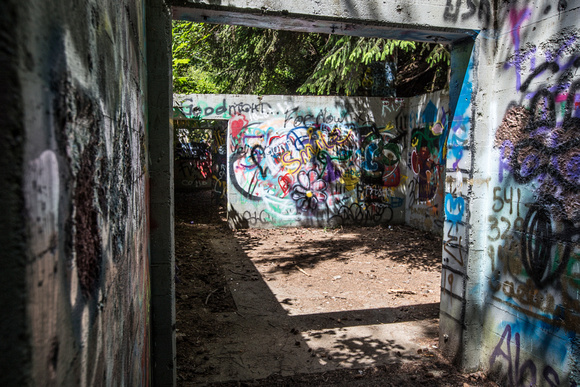 Closure
Deactivated in 1944. The SCR-270 Radar equipment was later declared obsolete by AG letter 17 Jan 1946. Tower and equipment to be disposed of while the buildings were retained.

Current Status
Cape Arago WWII Radar Site Access Gate Post.
Part of the Shore Acres Oregon State Park. Day use fee required. The concrete shell of the operations building remains intact but without a roof. Graffiti covers most of the exposed concrete walls. Access is from a Pack Trail trailhead on the Cape Arago Highway. The radar site is about 1/3 of a mile up the trail with a moderate climb. The site is located off to the right of the trail and is semi concealed by brush. Continue up the Pack Trail for a short distance to see the site from above.

Just up the trail from the access point on the Cape Arago Hwy is a remnant of the WWII access gate to the radar site. This is just a metal pole that would have supported a gate across the access road.

Cape Arago Drive
Note: There are three adjacent state parks at this location and the day use fee provides access to all three. First time visitors should drive the complete length of the Cape Arago Highway (it ends in a loop) and stop at all the viewpoints and facilities along the way. Some of the most stunning views of the Oregon coast are from these parks and don't miss the gardens or the sea lions.